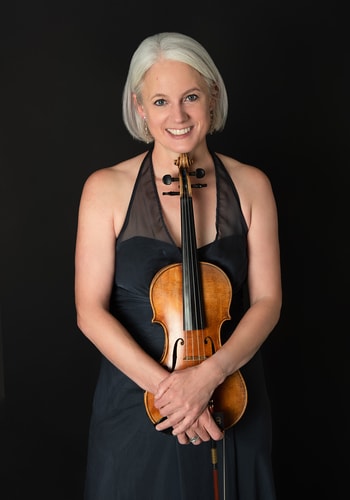 Helen Twomey (née Greenhalgh) is a busy freelance violinist based in Orpington in the London Borough of Bromley. Her diverse schedule includes working with orchestras and chamber ensembles throughout London and the UK, a violin and piano duo, a piano trio and also spending time teaching her little Twinkle Twinkle Little Stars.
Helen began her violin studies at the age of seven and within six months of starting had progressed into orchestras within the Bristol area. Since graduating from London’s Trinity College of Music in 1999, Helen has had a varied career playing in a variety of musical genres as a performer from orchestral, chamber music, rock, pop and nu-folk. In addition to performing, Helen also teaches violin from home and has a successful studio of young Suzuki violinists.

Helen is in demand as a violinist and has had over 30 years orchestral experience as a performer. She has toured the UK, Denmark, Sweden, USA and the Netherlands. She plays regularly with the Chameleon Arts Orchestra, DeHavilland Philharmonic and the Aurelian Ensemble. She has also worked with the Milton Keynes City Orchestra, Kentish Opera, New London Sinfonia, Meridian Sinfonia, London Pro Arte and the London Soloists Chamber Orchestra. Helen has given recital programmes around London and the UK as part of the Bromley-based Darwin Piano trio. They have performed in Bristol Cathedral, Southwark Cathedral, Chelmsford Cathedral, The Foundling Museum and St. Martins Within Ludgate in London. In addition to her piano trio work, Helen has performed recitals alongside pianist Eleanor Tagart in solo recitals within London. In 2009 she recorded violin and viola tracks for two British $50,000 Sellaband Artists Daniel Ward-Murphy and Ellie Williams for their respective debut albums “Until the Morning Light” and “Unseen”. Her playing has appeared on popular television shows such as BBC’s Waterloo Road and Channel 4’s Hollyoaks and has been on live radio shows on BBC Radio Kent, TalkSport 1089AM and Resonance FM. In addition to her regular violin, Helen also has a 4-string Bridge Instruments Electric violin.

Degrees and certificates that Helen holds are a Bachelor of Music BMus (TCM) from Trinity College of Music (studying with Gillian Findlay and Richard Crabtree), a PGCE (Post-Graduate Certificate of Education) in Music from the University of London’s Institute of Education with Qualified Teacher Status (QTS). Performance diplomas include a Licentiate of Trinity College London (LTCL) in Music Performance and a DipABRSM in violin performance. She is also a Fellow of the Royal Society of Arts (FRSA). Helen is a Graduate Level 5 Suzuki Violin Teacher with the British Suzuki Institute and works as part of the Kentish Suzuki Group.

Helen is a mum to two Suzuki pianists and in her spare time, she is an England Athletics affiliated runner with her local running club in Orpington, competing in distances from 5 miles to half marathon.
She has a British Athletics ‘Coach of Running Fitness’ (CiRF) license and is also a UKA licensed guide runner for the visually impaired. In 2019, Helen ran the London Marathon, raising money for Bloodwise, a UK blood cancer charity.